There’s nothing like an up-close look at the past to reinvigorate the present. As we approach Independence Day, an exploration of the iconic places in Philadelphia where the seeds of independence began to take root is a fitting way to anticipate the holiday.

At Carpenter’s Hall, the site of the oldest craft guild in America as well as the site of the first Continental Congress, the elevated Georgian architecture mirrors the significance of the events that transpired within. This landmark was a pivotal point in American history, both for fomenting dissent and forming an American identity. Not only was Carpenter’s Hall the setting of key debates preceding the Revolutionary War, but also it later housed a series of noteworthy institutions, from the American Philosophical Society to the First Bank of the United States.

Independence Hall, which is perhaps the backbone of the Independence National Historical Park, was constructed by the Carpenters’ Company of the City and County of Philadelphia to be the Pennsylvania statehouse. Serving as the backdrop to the drafting and signing of the two most momentous documents in American history—the Declaration of Independence and the Constitution—it has long since catapulted beyond distinction on a statewide scale to the national stage.

The Liberty Bell is the traditional image associated with the birth of our nation, in no small part because of the influence of one fictional account where the bell was rung to announce the first reading of the Declaration of Independence. While historians now dispute this depiction given its likely state of disrepair in 1776, with its signature crack like a fault line between two nations and its inscription “Proclaim Liberty Throughout All the Land Unto All the Inhabitants thereof,” it still resonates with very the heart of American freedom. It’s also associated with the nation’s continual rebirth, and even helped accomplish this renewal in the antebellum era when it traveled through America to promote healing throughout the United States. Just as it was once a symbol for abolitionists and suffragists, it remains an icon of liberty to this day.

Carpenter’s Hall is located at 320 Chestnut Street. The hall is open Tuesday through Sunday, from 10 a.m. to 4 p.m., and there is no cost of admission. Independence Hall is located on Chestnut Street, between 5th and 6th Streets. Walk-up tickets (limited in quantity) are required for tours between 9 a.m. and 12:45 p.m. and reserved tickets (each of which have a $1 handling fee) will be required for tours between 1 p.m. and 4:45 p.m. The Liberty Bell Center, which is open daily from 9 a.m. to 5 p.m., is located at 526 Market Street and has no cost for entry. 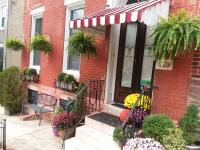