With its foundations constructed on the tenant of religious freedom, Pennsylvania was an attractive option for thousands of emigrants seeking refuge from the religious persecution that could be easily encountered in 18th- and 19th century Europe. For a group of German Lutherans, under the leadership of a self-proclaimed prophet by the name of George Rapp (1757-1847), Pennsylvania was the paradise they were seeking desperately to live their lives on their own terms, ideals, and desires (or lack thereof). With vows of celibacy, world-class efficiency, and a skill in enterprise that created a grand monopoly, Pennsylvania’s Old Economy Village—then known as Harmony—became one of the most successful utopia experiments (and the richest) in America.

Near the Ohio border in Beaver County sits Pittsburgh’s secret weapon. Now known as Ambridge, this powerhouse company town that began as Rapp’s Harmony is the one responsible for iconic landmarks like the Empire State Building, Brooklyn Bridge, Manhattan Bridge, and the Verazzano-Narrows Bridge (once reigning as the longest suspension bridge on the planet). But before the people here were building history’s grandest structures out of steel, a “Society” of German Lutherans were developing an interesting combination of agriculture and industry as they joyously and patiently awaited the Millenium, the 1000-year reign following Christ’s Second Coming. With outstanding economic adaptability, discipline, and efficiency, the Harmonist Society manufactured award-winning textiles, wool, cotton, silks, wine, beer, wagons, cabinets, metalworks, and leather products.

Take a day to visit Old Economy Village and its 17 structures that are a designated National Historic Landmark District or plan for one of its many events. Its distinctive character and charm of its architecture will enchant you and transport you back to the early 1800s when Harmony was a thriving community. Its grounds are a captivating representation of 19th century American life and its 6-acre museum (the second one built in the United States!) stands as a monument to thousands that sought and achieved the American dream, safe from persecution in Europe and free to pursue their personal happiness.

The Visitors Center acts also as the National Historic Landmark’s museum, with an introductory orientation exhibit as well as three other temporary exhibits. Featured locations and attractions are the 20-foot barrel-vaulted wine cellar, the surprising meditation hut called the Grotto, and the wedding-worthy gardens and statue of the Greek goddess of peace and kindness, Harmonia.

Take a guided tour to visit these locations with a knowledgeable guide April through December, Wednesday through Sunday; tours lasts approximately two hours and meet at the Frederick Rapp House. You can also take a self-guided tour of the historic site’s six main buildings. Visit the website for and admission. 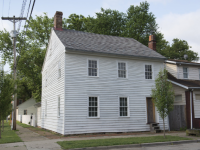 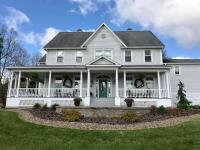 The Jacqueline House of Wilmington