If you grew up on Mister Roger’s Neighborhood but never grew out of the lessons and beloved characters it brought to life, take a trip down memory lane to visit the Pittsburgh neighborhoods that inspired this iconic show.

The Mister Rogers’ Neighborhood Exhibit at the Senator John Heinz History Center should be at the top of your itinerary, as it contains the largest collection of original items from the show, including the authentic entryway and living room set from the show, King Friday XIII’s Castle, Great Oak Tree, McFeely’s “Speedy Delivery” tricycle, and Grandpere Tiger. The exhibit also features a life-like model of Mister Rogers in his signature sweater, necktie, khakis, and sneakers. The History Center is open from 10 a.m. to 5 p.m. daily and admission is $18 for adults and $9 for students with a school ID.

From here, WQED Studios is just a short trip across the river in Oakland. True fans shouldn’t miss the opportunity to take a social media worthy shot in front of the building where hundreds of episodes were filmed and where the largest studio has since been renamed the Fred Rogers Studio.

At the “Tribute to Children” monument on the riverfront of Pittsburgh’s North Shore, you can catch a glimpse of the larger-than-life impact of this beloved television personality in the form of a 10-foot bronze statue of Mr. Rogers tying his sneakers, a pose universally identified with him. The proximity of the water—a nod to Fred Rogers’ love for swimming—as well as a sweeping view of the city he loved are a fitting means of recalling Mister Rogers’ lasting legacy.

If it’s a beautiful day in the neighborhood—or even if it isn’t—allow yourself to be transported up Pittsburgh’s Duquesne Incline by what could be a real-life stand-in of the Neighborhood Trolley. In this beautifully-restored wooden trolley from the early 20th century, you will have the opportunity to get a fresh view of the city and its history, especially if you visit the Incline’s museum of Pittsburgh history at the upper station. When you’ve taken in the panoramic view from the top of Mount Washington, what better way to top off your day than to take in some of the finest dining in the city? While you may not share Fred Roger’s vegetarian leanings, you could certainly dine less controversially and just as delectably at the phenomenal Monterey Bay Fish Grotto. Please note that the Duquesne Incline is cash only and exact change preferred (a machine is available to generate exact change) and that reservations are recommended at most of the premiere restaurants atop Mount Washington. 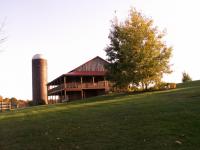