While the Keystone State boasts no official National Parks, we make up for it national battlefields, heritage areas, historic parks, forests, and trails that are all managed by the National Park Service. Exploring these locations and landmarks is a great way to experience both the natural landscape of PA and its rich history and heritage that is essential to America’s past, present, and future.

Gettysburg transformed from a small, rural town to one of the most sacred locations in America. When the Federal Army of the Potomac met the Confederate Army of Northern Virginia in south-central Pennsylvania, the bloodiest battle in American history took place with more than 50,000 casualties. Explore its hallowed ground on one of its famous ghost tours, view priceless war artifacts in its museums, travel the bridle trails for horseback riding, view the huge cyclorama, or plan a trip for the anniversary reenactment this July.

The Fort Necessity National Battlefield commemorates the grounds of the opening clash of the French and Indian War. It was in this theater of war that George Washington would gain the experience he needed to successfully lead American troops in the Revolutionary War. The site includes the Mount Washington Tavern, once one of the inns along the National Road.

Valley Forge National Historical Park memorializes the brutal, infamous winter encampment of 1777-78 during the Revolutionary War. While thousands perished from exposure, hypothermia, and disease, the spirit of the revolution persevered, leaving a legacy that still resonates within all Americans today. Walk along the trails which connect the key monuments and historic structures, including Washington’s Headquarters, the National Memorial Arch, and a recreated log-cabin barracks.

In the mid-1800s, travelers leaving Philadelphia for Pittsburgh would plan on their trip taking several weeks. But in 1854, the Allegheny Portage Railroad was completed and the first transportation system through the Alleghenies shortened the trip to only 3-5 days. Considered an engineering marvel in its day, the Allegheney Portage Railroad also included the very first railroad tunnel in the United States. Today, visitors can learn the story of the National Historic Site at the Summit Level Visitor Center, the Engine House No. 6 Exhibit Shelter, and the Samuel Lemon House. Once a tavern frequented by travelers along the way, the Samuel Lemon House now houses the museum.

The Oil Region National Heritage Area in northwestern Pennsylvania was the 25th National Heritage Area in the United States and its cultural exhibits and attractions tell the story of the first successful commercial oil well in the world. It explores the scenic communities, historic Victorian architecture, lush farmlands, and woodlands of “the Valley that Changed the World” that began thriving alongside the global petroleum industry.

Click here for more information on Pennsylvania from the National Park Service. 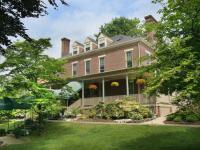 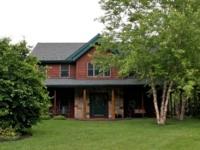 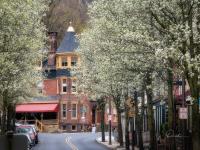