For over two centuries, people have been visiting a secluded mountain resort town in Pennsylvania’s Endless Mountains known for its cool, clean air and crystal clear waters. Eagles Mere, called The Town Time Forgot, remains much as it did years ago thanks to the efforts of its visitors placing the land into the protective stewardship of a Lake Association and Nature Conservancy.

Today, the town is on the National Register of Historic Places and has specialty shops, bookstores, an old-fashioned sweet shop, a museum, a golf club, and inns and cottages. Visit and discover the wonders of “The Last Unspoiled Resort” that attracted thousands of people seeking lazy summer days in some of nature’s most beautiful scenery. Who knows? Maybe you’ve found your new favorite vacation spot!

Exploring Eagles Mere’s 200-year history at the museum is one of the best activities when visiting. From its origins as a glass-making factory to the Victorian cottages of its summer residents, the interactive displays show the culture and history behind Eagles Mere and how it became a popular vacation spot for the Eastern United States. Exhibits include the George Lewis Glassworks Era, The Farming Era, The Narrow Gauge Railroad, and the Big Hotels Era. View photographs, genealogical records, brochures and newspapers, and more. Just look for the restored General Store in the heart of Eagles More for the entrance to the museum.

You can also visit the Eagles Mere Auto Museum which houses over 75 vehicles from the 50s and 60s. A destination spot for automotive enthusiasts, the retro collection of pristine classic vehicles gives you a chance to relax and remember days gone by. The opening day for the 2018 season at the Eagles Mere Auto Museum is May 19th. For more information, visit the website.

Other events and activities at Eagles Mere include a summer antiques market held every July, an annual Arts & Crafts Festival held every August, and an Annual Bi-Planes, Trains & Automobiles held every October, all held on the Village Green. For more information about these events, click here. 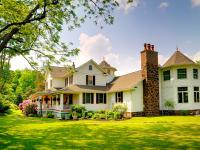 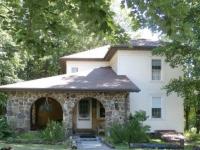